Sidebar: My Thoughts on the Wright County Sheriff’s Office 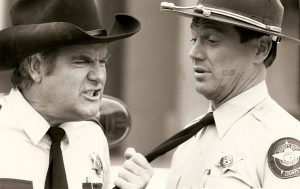 When I re-launched this blog two years ago, I promised (or should I say, warned?) that I would sometimes veer from black letter legal commentary when I had a thought or two on another important topic.  This is one of those times, so let’s just call this genre of posts a “Sidebar”, to keep some legalese in there.

The recent row in Forest Lake, Minnesota as to whether the City should eliminate its police department and instead contract with Washington County for the City’s law enforcement needs has shed light on a practice common to several small Minnesota communities who may lack the resources to have their own full-time police departments; namely, the practice of contracting with the county sheriff’s department to have an agreed upon number of deputies cover that particular city’s law enforcement needs.

In the end, the Forest Lake City Council reached an agreement with the police union as to a new three-year contract.   Speaking as someone who lives in one of those communities which utilizes contracted deputies from the sheriff’s department, I believe that Forest Lake made the right decision.

Why would I say this?  Keep reading.

In the past fifteen plus years, the northeastern portion of Wright County – particularly the cities of Albertville, St. Michael and Otsego – have experienced exponential population growth.  This area of the county is no longer a collection of farms spaced 5-10 miles apart.  Rather, most folks who live in these cities reside in housing developments with houses placed on relatively small (1/4-1/3 acre lots).  This change in local demographics has, in my opinion, exposed issues with how the WCSO provides enforcement in these communities.

Here are just a few examples from our own experiences in dealing with the WCSO:

To be fair, there are a number of newer deputies with whom I’ve interacted who are doing a great job.  I worry, though, as to how long they’ll stay with the department given the culture and given the responsibilities placed upon them when a city such as Albertville may not be hiring enough deputies based upon its current law enforcement needs.  When a deputy tells you that the Albertville Premium Outlets “are going to be the death of” him, when mall employees ask us “locals” to tell our local officials to provide them with more law enforcement, and with another mall project slated to begin construction soon, as a resident, it concerns me that our City does not have adequate coverage through the WCSO.  That, however, is a separate issue from the WCSO’s competency and attitudes.  At heart, the WCSO has to accept that a portion of the County has essentially been annexed into the Twin Cities metro area, yet some of these cities are still too small to have their own police force.  Patrolling a city with multiple residential developments requires a different skill set from patrolling a largely rural community with farms spaced ten miles apart, and the WCSO must adapt to this new reality when making decisions as to the hiring and retention of its deputies.

In my opinion, the WCSO has issues with competency and, putting it bluntly, misogyny.  It’s time to end the “boys will be boys” attitudes.  Many of the housing developments halted during the market crash are now seeing new construction again, meaning that unless addressed, the issues in the WCSO are going to get worse before they get better, and that could lead to other problems or even a general reputation that our growing communities aren’t quite ready for prime time.

Back to the starting point of this discussion, I don’t know if the ongoing investigation will lead to any changes within the WCSO.  I am hopeful though that my speaking out about my family’s experiences may prompt officials to look deeper than just this single complaint.  I think it’s time for new leadership, a new attitude towards a changing population and an improved culture, and no more of the “we’ve always done it this way” attitude that is pervasive in this community.

One more thing before I go.  To KSTP-TV and reporter Jay Kolls: while you’re reporting on screwed-up sheriff’s departments, you might want to shine a light over on Anoka County; they hire some real gems over there….