Eminent Domain and the Problem With Short-Term Thinking

Jeffrey O'BrienPosted on May 28, 2010 Posted in Blog, Real Estate Law 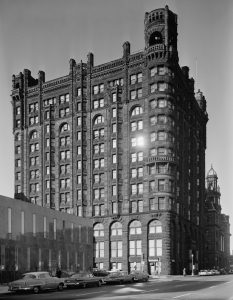 Eminent domain refers to the power possessed by the state over all property within the state, specifically its power to appropriate property for a public use. The proceeding by which a government unit exercises its eminent domain power is called a condemnation proceeding.

Recently, two highly-publicized condemnation proceedings from the past, which occurred more than forty years apart, have found their way back into the headlines and demonstrate the problems which arise when urban renewal/redevelopment projects are carried out in a “ready-fire-aim” fashion.

Here in Minnesota, the discovery of the first three floors of the Metropolitan Building in a Delano scrap yard has brought back memories of the infamous Gateway District urban renewal project  of the early 1960s, where the City of Minneapolis essentially demolished a large chunk of its downtown area in order to rid itself of its seedier aspects.  “The Met”, as it was called, was the focus of the earliest of historic preservation efforts in Minnesota but, unfortunately, the Minnesota Supreme Court ruled in 1960 that the City of Minneapolis could take the Met down with everything else in the Gateway.  Nearly five decades later, some sites still sit empty and a movement is on to recover the Metropolitan’s remnants for an as-yet determined use.

Meanwhile, an eminent domain case which took on national significance after a highly-criticized U.S. Supreme Court case has found its way back into the headlines.  The case of Kelo v. City of New London involved the City of New London, Connecticut attempting to take private property, including the home of Suzette Kelo, in order to redevelop the area into a new corporate facility for Pfizer, Inc.  Five years later, Pfizer has pulled out of its expansion plans and the property  taken by New London sits vacant with no current prospects for a replacement project.

The 1960 Minnesota Supreme Court case focused on whether the City of Minneapolis could use its takings power under the Municipal Housing and Redevelopment Act to redevelop property other than housing, whereas the Kelo case focused on whether taking property for economic development constituted a “public use.”  In both cases, the courts answered yes, the government taking proceeded and the buildings came down.

The cases involving the Met and the Kelo property share something else in common as well.  Each case prompted a societal outcry leading to changes being made to prevent these situations from happening again.  The Met’s fate prompted Minnesota’s historical preservation movement, and today we have non-profit organizations such as the Preservation Alliance of Minnesota  which seek to protect buildings and other structures with historical significance from the wrecking ball.  Similarly, the Kelo decision spurred state legislatures to enact tighter restrictions on the use of eminent domain powers for economic development.

The larger question, however, in both instances, is why do we engage in such myopic thinking about urban planning in this country.  For example, during the housing boom of the early 2000s, the City of Minneapolis saw an exponential increase in new condominium developments, many built from the ground up.  Some of these developments were very near to the Gateway District.  As I watched these buildings go up, I could not help but wonder whether any of the hotels which were demolished in the Gateway between the 1960s and the 1990s could have been repurposed into condominiums for less cost than and without the use of additional resources in the newly constructed buildings.

Case in point:  the Nicollet Hotel.  Once the crown jewel of Minneapolis hotels, the Nicollet ultimately fell into disrepair and met with the wrecking ball in 1991.  Here’s a picture of the Nicollet in its heyday: 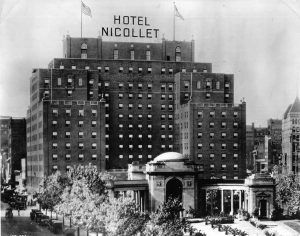 And here’s a picture of the site today: 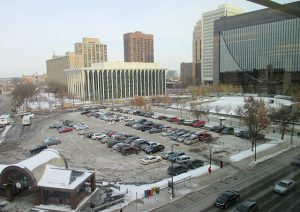 Yep, that’s right folks; nearly twenty years after its demolition, the Nicollet Hotel site remains a parking lot while condominiums have sprouted up all around it.  Was that a wise use of resources?

Today, thanks in large part to the efforts of the historic preservation movement, we’re seeing several downtown buildings repurposed into hotels (such as the Foshay, which is now the “W”).  However, we’ve simply shifted our ire from buildings of the first half of the twentieth century to those of the second half, and the result has been the loss of the original Guthrie Theatre , the Minneapolis Public Library  and a structure that Minnesota pioneered:  the enclosed mall (Apache Plaza  has already been replaced with a lifestyle center, and Brookdale certainly could meet a similar fate).

“Demolish and replace” as an urban planning philosophy often produces results akin to bad plastic surgery, with eminent domain serving as the scalpel.  If instances such as the Metropolitan’s demolition (which is now seen, as many at the time predicted, to be a colossal mistake) and the Kelo case teach us anything, it is that governments would be wise to think long and hard before pulling the trigger on exercising its eminent domain powers.  Otherwise, we lose a part of our history and some of our liberties as well.