Should Minnesota’s Eminent Domain Laws be Amended to Provide Relief for Business Owners Forced to Close by the State? Justice & Drew, 5.13.20 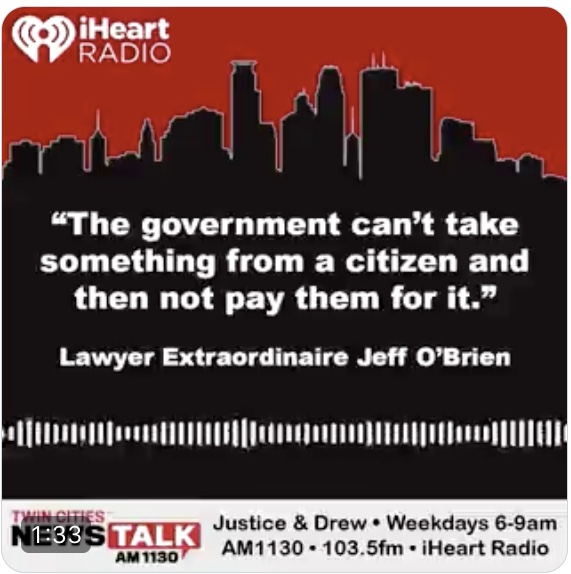 On Wednesday, May 13, I joined my good friend Rep. Shane Mekeland on Justice & Drew to talk about Rep. Mekeland’s recently introduced bill, HF 4651, which would expand Minnesota’s eminent domain laws to allow business owners to sue the state for just compensation when a Governor forces them to close during a peacetime emergency, as is the case with Governor Walz’s continued orders directed against Minnesota businesses. Click here to listen to our discussion. Also, be sure to check out the language of the actual bill.

Will HF 4651 pass during the 2019-20 Legislative Session? Stranger things have happened, but it is doubtful. In fact, I doubt that the majority party in the Minnesota House will even allow it to have a hearing, and I doubt even more that Governor Walz would sign into law a bill which would allow businesses to sue the state for his actions over the last several months in forcing them to stay shuttered. Still, the COVID-19 crisis – and more specifically, the ensuing government-ordered shutdown of small businesses, has exposed the need for this change in our eminent domain laws, as a regulatory taking of a business, even if temporary, should be viewed through the same lens as a taking of real property. Rep. Mekeland’s bill is intended to initiate discussion on the topic, and I applaud him for his leadership in introducing this very important piece of legislation.

UPDATE: Tyler O’Neill of PJ Media picked up on our interview and called our idea “brilliant” in this article over at pjmedia.com. Not bad, eh?