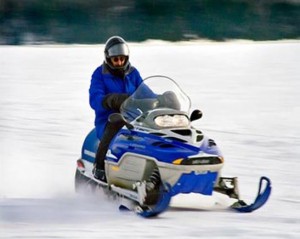 Snowmobiles have been in the headlines in Minnesota lately.  A recent StarTribune story discussed how snowmobile related deaths in Minnesota in 2014 were the highest since 2010, with alcohol and speed being among the leading factors in snowmobile-related accidents.  Closer to my home turf in Wright County, there have been at least three notable snowmobile-related crashes in the past year in the cities of Monticello, Maple Lake  and most recently, Otsego.

As I stated in my January 17 Legal Minute, for some Minnesotans, snowmobiling is a popular wintertime activity.  However, snowmobilers need to be aware of applicable State and local laws regulating the operation of snowmobiles in Minnesota so as to not infringe upon others’ private property rights.

Minnesota’s snowmobile laws are codified at Minnesota Statutes Section 84.81, et. seq. , and the Minnesota Department of Natural Resources (DNR) has promulgated rules regulating snowmobile operation at Minnesota Rules Section 6100.5000, et. seq .  Generally speaking, under current Minnesota law, anywhere in the state, snowmobilers may ride in the bottom or outside slope of a ditch of a county or state road, on state and local trails, on iced-over waters that have legal access, on township roads unless otherwise restricted by local ordinance, on public lands that are open to motorized vehicles, and on your own land.

In the seven county metro area (i.e., Hennepin, Ramsey, Washington, Dakota, Anoka, Scott and Carver), snowmobilers may ride on land that is posted with signs stated “snowmobiles allowed”, on land other than your own with written or spoken permission of the landowner, occupant or lessee, or on the groomed area of a snowmobile trail.

Outside the seven county metro area, snowmobilers may ride on agricultural land with permission of the landowner, on land other than agricultural land that you have not been told verbally, by written warning or by posted signs, that riding is prohibited, and on the groomed area of a snowmobile trail.

I have to admit that despite being a lifelong Minnesotans, I have never been on a snowmobile.  I spent most of my life living in communities where the only place you would find a snowmobile is in the garage, on a trailer, to be brought to a cabin someplace up north.  However, having now lived the past 7+ years in a community where snowmobiling is permitted, I have some thoughts as to how the current Minnesota snowmobile laws could be improved.

Given the shift in where Minnesotans live and the growth of the Twin Cities metropolitan area, it may be time to look at revising the current bifurcated system of snowmobile rules in the State or, alternatively, to adopt a uniform, statewide set of rules that apply regardless of location.

A good example of the problems with the current laws is my current city of residence (Albertville, in Wright County).  Albertville is a city in northeastern Wright County situated near the Wright County-Hennepin County border.  For decades, Albertville was unquestionably a rural community, marked by large acreage farms.  In the past 15-20 years, however, much has changed.  According to statistics available through www.themlsonline.com, Albertville has experienced 157% population growth since 2000, and has a population density of 1,066 people/mile.  Many of the once-existing farms are now residential neighborhoods, and the city is home to one of the more popular retail spots in the State; i.e., the Albertville Premium Outlets.

Albertville, and the nearby communities of St. Michael and Otsego, typify the growing trend towards urbanization along the Wright-Hennepin border.  In other parts of the metro, cities such as Cambridge and Isanti (both located in Isanti County) also find themselves home to more residential development over the past 15 years and abut the traditional “seven county metro.”  With this type of growth and change, problems can arise when laws don’t evolve with the shift in population.

Admittedly, use of law enforcement to enforce snowmobile laws is fruitless.  There is simply no way that a squad car can catch up to a snowmobile.  Hence, compliance is on the honor system, and, for the most part, most snowmobilers understand and abide by the laws, which makes the verbiage and currency of these laws so important.

It would be difficult to change the state law to simply annex Counties such as Wright, Sherburne or Isanti into the “metro area” as there are large portions of these counties that retain their rural character.  Further, carving out pockets of cities seems to be a cumbersome task as one can foresee the need for additional changes ahead as the “metro” becomes a larger and larger swath of cities.  Hence, my recommendation is to adopt a uniform, statewide law regarding snowmobile operation of privately-owned lands that provides that snowmobiling on any privately owned land in the State of Minnesota is not permitted without the prior permission of the landowner, and that the private land for which access has been granted should be posted designated that snowmobiling is permitted (rather than have a situation where some signs mark valid trails and others contain “no snowmobiling” messages – is a snowmobiler supposed to slow down and read each sign to decide if it’s a “yay” or “nay” in terms of continuing on his/her route?  That, to me, is unreasonable).  Minnesota is home to some wonderful snowmobile clubs and they can certainly take the time and do the legwork to sleuth out willing landowners and install the required signage, as opposed to the patchwork system that presently exists.

Minnesotans are fortunate to have a beautiful state in which to pursue outdoor recreational activities year-round.  However, those activities have to be enjoyed in a manner which does not infringe on other’s property rights.  With a few minor adjustments, Minnesota’s snowmobile laws can keep this delicate balance.

As for the Legal Minute, archived segments are available here, and be sure to tune in to the show live every Saturday at 7AM Central Time, on 1500ESPN AM, or catch the podcast.