The Art of Contract Negotiation aka Where Ragnar Went Wrong 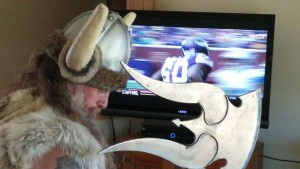 Ragnar’s tenure with the Vikings came to an end prior to the start of this season.  During the team’s home opener on September 20, Juranitch posted on his Facebook page a photo of himself watching the game at home and indicating that he had been let go.  At first, fans were outraged at the Vikings, epithets were hurled at “Viktor” the newer more cartoonish Vikings mascot.  There was even a petition started to bring Ragnar back.

And then the Vikings shared their side of the story.

As it turned out, Mr. Juranitch was asking for a considerable raise to continue performing as Ragnar for the upcoming season, and subsequent seasons.  And “considerable” is me being kind:  Juranitch was asking for $20,000.00 per game, a substantial increase over the $1,500.00 per game that he’s made for each game since 1994.  Considering the fact that most professional mascots make $20,000 for a season, Juranitch’s compensation demand seemed outrageous.
Contract law is not rocket science.  By law, both an offer and an acceptance are essential to form an enforceable contract.  An offer is a commitment by one party to certain definite terms, provided the other party involved in the bargaining transaction will likewise express his or her assent to the identical terms.

And when you are tasked with making the opening offer as Mr. Juranitch was (according to both sides), there is an art in crafting that offer.  If you make an initial offer that is so outrageous, the other party could simply walk away from the negotiating table.  That seems clearly to have happened here.

As an attorney, I often have clients that wish to make what I feel are outrageous demands, be it in the course of a business negotiation or in the midst of a dispute.  Mindful of Mr. Root’s famous words above, however, my role is to recognize what might be “deal breakers” and counsel my clients against making such outrageous demands.  Perhaps if Mr. Juranitch had consulted an attorney to create his contract proposal instead of having, in his words, “a buddy help him with it”, he would still be employed by the Minnesota Vikings.

Speaking of the Minnesota Vikings and contract negotiation, one of the 50 Greatest Vikings, running back Dave Osborn (1965-1975), once told me a story about how he handled his contract negotiations.  Back in those days, the NFL used a “standard player contract” and the only issue came down to the player’s salary.  Players would be given the contract from the team and asked to insert an amount for their salary request and return it to the team’s General Manager.  Mr. Osborn instead left the salary amount blank, signed it, and gave it back to then-General Manager Jim Finks, instructing Mr. Finks to “fill it in with what you think I’m worth.”  That tactic resulted in Mr. Osborn receiving twice as much as he expected for that season.  He went on to say that he employed this tactic each year until 1974…when “Remarkable” Mike Lynn took over for Jim Finks as General Manager.