The Year I Met Margaret Thatcher…Twice 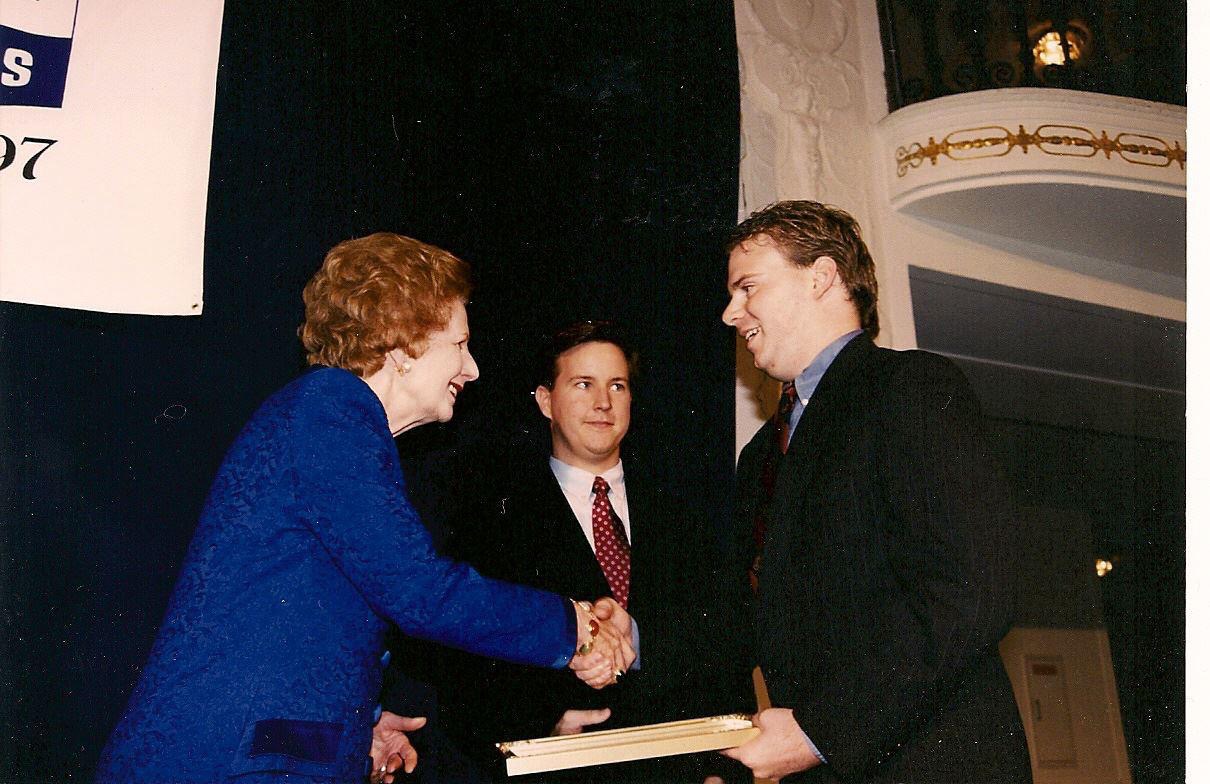 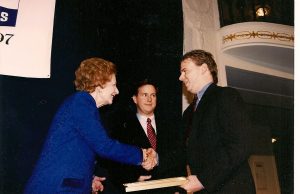 1997 was a momentous year for me.  In May I graduated from the University of St. Thomas.  Later that year I began my law school career at William Mitchell College of Law, and in between I spent three months working in Washington, DC for former U.S. Senator Dave Durenberger, who would ultimately become my political mentor.

But that’s not what I remember most about 1997.  You see, 1997 was the year that I met former Prime Minister of Great Britain, Baroness Margaret Thatcher…not once, but twice.

Today, as the world mourns Baroness Thatcher’s passing and remembers her innumerable contributions to the world – the revival of Great Britain, the collapse of Soviet Communism and her rise to power as a woman at a time when male leaders were the norm – I’ve thought back to 1997 and how I experienced something twice that most people never experienced once.

Here’s how it happened:

Back in 1997, I was working as an intern at a Twin Cities public policy organization, Center of the American Experiment.  Baroness Thatcher was scheduled to keynote the Center’s annual dinner in May 1997 and I was going to be one of the fortunate folks that was going to assist with the event and, since I was staff, meet Baroness Thatcher.

I have to admit at this point that growing up as a somewhat politically-aware kid in the 1980s, I was more familiar with Baroness Thatcher’s U.S. counterpart, President Ronald Reagan, than the woman known as the “Iron Lady.”  Perhaps that’s why when I received in the mail a notice of an essay contest about Baroness Thatcher’s political philosophy aka “Thatcherism” whilst we were planning for her Minneapolis appearance, I took a flyer on it and decided that this could be a good way to learn more about this very distinguished woman.

The gist of the essay contest was this:  participants would be sent paperback copies of Baroness Thatcher’s two-volume memoirs, The Downing Street Years and The Path to Power.  We were to read them and write an essay analyzing what Margaret Thatcher’s political philosophy entailed.

It took several weeks to get through both volumes, but I had them both read by the time Baroness Thatcher hit Minneapolis in May.  A few weeks after her speech, graduation time had arrived and shortly afterwards I was off to Washington, D.C. to work with Senator Durenberger and his wife.

Sometime around mid-June, I sat down to write the paper, and when I say sat down, I don’t mean in an air-conditioned office.  No, I put together my essay on my roommate’s laptop while sitting on a mattress in my steamy basement room at a house in Vienna, Virginia.  Not what you would call the ideal writing conditions, and when I put the paper in the mail I figured that was the end of the story.  I put the pithy title on it called “Blueprint for a Free Society”, and if you want to see what my writing style looked like back then, I’ve posted the paper here.   I finished out my summer gig with the Senator and returned home to Minnesota in August to start law school.

And in early September, I received an envelope in the mail from the Intercollegiate Studies Institute, the sponsor of the essay competition.  Inside was a congratulatory letter, a check and a plane ticket that I would need to travel back to Washington DC in a matter of weeks…to meet Lady Margaret Thatcher…for the second time that year.  As it turned out, my attempt to self-educate myself prior to Baroness Thatcher’s Minneapolis appearance resulted in my being named one of the finalists in the essay competition.

The picture at the top of this post is from that second meeting in Fall 1997.  Each finalist would be acknowledged at a luncheon attended by Baroness Thatcher herself.  When the day arrived, we each were invited up to the dais and Baroness Thatcher shook my hand and gave me a hearty “well done” in that distinguished British tone that she had.  I’ve thought about that moment quite a bit today.  Some weeks after the event in Washington, a package arrived at my house which contained a hardcover set of the memoirs, with The Downing Street Years bearing Baroness Thatcher’s signature inside.

Rest in Peace, Baroness Thatcher.  It was an honor to meet you back in 1997…both times.

Tagged with: Center of the Ameican Experiment, Margaret Thatcher